They have been among us for thousands of years. One mysterious gene they carry lies dormant—until they change. Joe Case is an ex-cop searching for the man who humiliated his sister. Kelly McCammon is a Hollywood executive running from the Russian mob. Destiny leads them to tiny Salt Lick, Nevada…A town under siege.

"CLAN is a thriller with a genuine bite. Once Harry Shannon gets his claws in you he will not let go! Highly recommended."
—Jonathan Maberry, New York Times Bestselling author of Patient Zero and Dust & Decay

Today's Mystery Scene Blog features the e-book version of "Flesh & Bones" with a nice mention of my September hardcover, "Lassiter."

Many thanks to Oline Cogdill, the dean of mystery reviewers.

Posted by paul levine at 1:24 PM No comments:

We’re baaack… and this week we’re talking about the Bad Guys. How do you write a Bad Guy who’s not cardboard, stereotypical, or boring? Our very own “bad guys” Bill Crider, Dave Zeltserman, Harry Shannon, and Paul Levine will tell you. But don’t let them stop you. Please join us with your two cents. (Of course they may have to kill you afterwards…)


Bill Crider here. Everybody likes to write the villains. I’m sure a good analyst could explain why better than I can. Anyway, for me there has to be something in even the worst villain that people like. Or maybe that’s the wrong word. “Recognize” might be better. Villains have to be as human as the other characters. They should also have reasons for what they do. I’m not a fan of the book that ends with the “he must have been crazy” explanation. And while Shakespeare can get away with attributing Iago’s misdeeds to “motiveless malignity,” I’d never try that one, not being quite in Shakespeare’s league. One more thing: The villain has to be right for the story. Hannibal Lecter wouldn’t fit in Cabot Cove, or at least he wouldn’t work for me in that setting. (Jessica Fletcher could probably handle him, though.)

Dave Zeltserman here. I’ve written a lot of bad guys, but none badder than Kyle Nevin. Violent, amoral, near-psychopathic, Nevin is my protagonist for Pariah. That’s right. The main guy, the one who the reader is going to follow throughout the book. This is a character who thinks nothing of breaking a man's fingers and slamming a car door into his face for leaving a dumpster in the neighborhood uncovered, or beating someone to near death for failing to pay him what he considers the proper respect. But readers need to like and sympathize with your main character, right? Well, Nevin has a certain verve and charm to him, but what readers really need is to be fascinated by him and want to know what’s coming next. What’s important in creating a character like Nevin, and really any bad guy is that he has to feel very real and can’t be some drooling cartoonish version of a villain. The things that Nevin does might be very wrong, but in his skewed way of thinking it all makes sense and is justified, and the reader needs to believe that also. As long as Nevin’s logic, no matter how screwed up it might be, is consistent, he will seem very real to the reader, and very scary.


Harry Shannon here. We'll use "guy" knowing the antagonist could easily be female, especially these days. As any actor will tell you, the bad guy has rationalized his behavior and rarely thinks of himself as the bad guy. The rest us have treated him unfairly, or someone else's cruelty has justified his own. A sociopathic personality is driven by fear, anger, avarice and not much else--but isn't ever at peace. He tends to believe the rest of us are the same way, i.e. crying crocodile tears, manipulating for advantage and so on. That makes for a scared and hollow experience of life. Knowing this can help create a far more realistic enemy. The sexual psychopath is often driven by a punishing super ego. John D. MacDonald understood both those folks very well, and gave them voice as few authors have done. Evil humans are like the rest of us in that sense, that is to say tortured by inner demons they usually don't even recognize as their own. If we can relate to them on a psychological level they are that much more terrifying.


Paul Levine here. Harry referred to John D. MacDonald, author of the classic “Travis McGee” series. MacDonald also said “there are no one hundred per cent heroes.” I’d like to turn that around and say that the best antagonists are not “one hundred per cent villains.” Remember cold-blooded assassin Alan Ladd in “This Gun for Hire.” He feeds a stray cat…before slapping around his landlady and shooting the target of a paid hit. The best villains believe what they’re doing is right, at least according to their own skewed moral codes. Remember “Max Cady,” the relentless ex-con portrayed by Robert DeNiro in the remake of “Cape Fear.” Was he evil? You bet. But Cady doubtless thought he was justified in terrorizing Nick Nolte’s family. After all, Nolte, his own lawyer, sold him down the river. That violated the code of lawyers…and criminals alike. (Coincidentally, “Cape Fear” was adapted from a novel by MacDonald, “The Executioners.”) Something else we can learn from the vicious Max Cady. A villain can be uneducated and crude and yet brilliant in his own, twisted way. And that’s far, far better than a stupid, brutish villain. The antagonist should be a worthy opponent of the hero, whose task must be challenging, both physically and mentally, and sometimes morally as well.

Inside Top Suspense is coming back this Monday

Join us Monday as we discuss writing the bad guy.

More Inside Top Suspense topics are also planned. And if you've got topics you'd like us to discuss, let us know about them.
Posted by Dave Zeltserman at 9:09 AM No comments:

SET THE NIGHT ON FIRE at KindleBoards

Hi, all. Those of you who are on KindleBoards might be interested in a discussion about SET THE NIGHT ON FIRE. It's part of their "Read With The Author" Book Klub, which they're in the process of reviving. I am one of six authors they asked to lead a discussion, and I had the "good fortune" to be the guinea --er -- first.

So, I'd love it if you popped over and put in your two cents. There are a bunch of threads, but you really don't have to have read the book to participate -- some of them are pretty general.

Thanks. See you over there.
Posted by Libby Hellmann at 8:47 AM No comments: 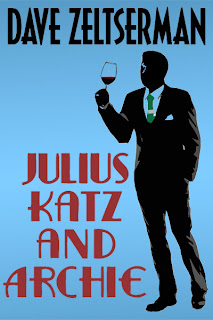 Julius Katz and Archie is a wonderful mix of old school and new. It’s old school in that the mystery is presented in a slight variation on the classic British drawing room setup (the suspects are all gathered together, though not in a secluded location), the violence is minimal and offstage, with the investigator solving the crime through intelligence and deduction instead of car chases, fist fights and shootouts. New school, on the other hand, is well represented by Archie’s very high tech presence (he’s constantly hacking into various databases to gather information) and hard-boiled personality. Indeed, in Julius Katz and Archie author Dave Zeltserman has packaged the best of both crime fiction worlds into one delightfully charming read.

Elizabeth White's review of Julius Katz and Archie
Posted by Dave Zeltserman at 2:09 PM No comments: