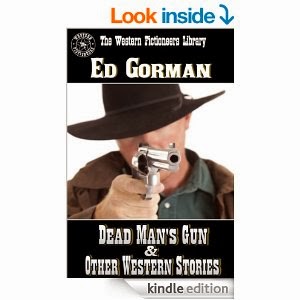 Though he’s better known for his crime, mystery, and horror fiction, Ed Gorman is no slouch at writing westerns, either. Gorman’s spare style and uncomplicated prose make it easy to imagine the author as a storyteller in the oral tradition, forced to put pen to paper during an attack of laryngitis.

Perhaps nowhere is that better expressed than in the new anthology Dead Man’s Gun and Other Western Stories. The collection of nine short tales and one brief treatise entitled “Writing the Modern Western” provides eloquent evidence of the author’s exceptional range in storytelling. More than range, though, Gorman’s short stories display the author’s uncommon ability to dig into the darkest recesses of the human psyche and expose the thin lines separating good and evil, bravery and cowardice, love and hate, pride and shame. The way Gorman’s characters balance on those lines — always in danger of falling to one side or the other — will make readers alternately shudder and rejoice.

No matter how uncomfortable the thought may be, Ed Gorman knows us all. Gazing into his mirror is undeniably uncomfortable, yet oddly liberating. “Dead Man’s Gun” will resonate with anyone who’s ever wanted revenge. Writers and movie buffs will relate to “Pards,” a bittersweet tale about a middle-aged, unsuccessful writer who finds a spiritual twin in an aging matinee icon. “The Face,” a Civil War story, is an atmospheric, psychological study of men under pressure, inexorably sliding into madness. “Mainwaring’s Gift” is at once sad and romantic and hopeful. “Gunslinger,” “Blood Truth,” and “Dance Girl” are equally compelling, each in its own way.

Though all the stories take place in the 19th century American west, it’s difficult to define Dead Man’s Gun and Other Western Tales as simply “western.” Fans of psychological horror, crime, and mystery will find much to enjoy in this volume, as well. 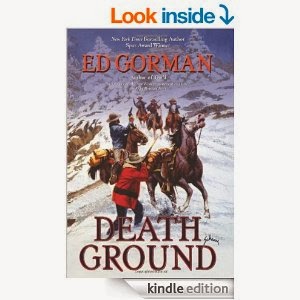 Leo Guild is an aging bounty hunter. He is a former lawman, father and husband, but that is all behind him. Now he rides alone. He is  melancholy, intelligent and violent; when he needs to be. He also has a  past that sticks with him. He killed a little girl. The courts forgave him, but he can't find the heart to forgive himself.

DEATH GROUND opens on the evening of Guild's 54th birthday. In lonely  celebration he makes a date at the local brothel with a young "straw-haired" girl. Things don't go as expected with the girl and his birthday truly turns for the worse when he is summoned to the Sheriff's office.

Two men are dead. One--Merle Rig--hired Guild as a bodyguard and the other--Kenny Tolliver--was technically Guild's employee. He hired Kenny to protect Rig while he paid a visit to the "straw-haired" girl. As he looks at the cadavers on the heavy mortician's tables he figures his job is gone and it is time to ride on, but first he pays a visit to Kenny's mother. A scene that unsettles Guild and also piques his interest; Kenny's mother knew Rig and Kenny palled around with a couple local deputies.

Leo Guild decides he can't leave town until he figures who really killed the pair and why. He has a feeling it is not the violent mountain man being blamed by the Sheriff, but he doesn't have many suspects. He doesn't have anything but a hunch, really.

DEATH GROUND isn't a traditional Western. It, like all of Gorman's Westerns, is a noir mystery wrapped in the trappings of the Old West. That is not to say that the historical element isn't accurate or interesting, because it is. It is also central to the story, but an Ed Gorman Western is more of a historical mystery than anything else. A hardboiled historical mystery at that.

The prose is tough and tender in varying shades. It defines the story, action, and protagonist with a lean, smart and melancholy and literate style:

"Then he started digging snow up with both hands, and he covered them good, the two of them, and then he stood up and looked out on the unfurling white land. There was blue sky and a full yellow sun. Warmer now, there was even that kind of sweetness that comes on sunny winter days. It made him think of pretty women on ice skates, their cheeks touched perfect red by the cold, their eyes daring and blue."

Leo Guild is an everyman. He is the man who does what needs to be done. He isn't a hero, or a villain, but rather he is simply a man; a man who has seen much, done much, and lost much. Guild is an example of what makes Ed Gorman's fiction so damn good: characters that are measured and three-dimensional; characters that act, feel and sound real. His male characters are strong and pitiful, lustful and scared, vain and dangerous, lonely and weak--generally all at the same time--and more
importantly they are recognizable. And his female characters exhibit the same steady qualities. Neither wholly good nor bad, just human.

DEATH GROUND is a Western that should have wide appeal. It will please the traditionalist with its rugged description of frontier life and the people who settled it. It will also introduce readers of hardboiled crime fiction to a new genre, but mostly it will please any reader who wants something tangible and meaningful mixed into a well-told, excellently plotted and immensely entertaining novel.