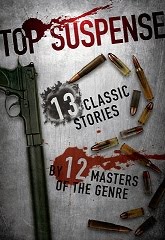 Welcome to the launch of INSIDE TOP SUSPENSE, an ongoing discussion on the craft of fiction writing. Between us, the members of the Top Suspense group (you can see who we are on the right) have published literally hundreds of novels and stories, many of them best-sellers and award-winners. In the coming months we hope to share our knowledge with you.

Each week (or maybe two, depending on our schedule) several of us will discuss a topic related to the craft of writing and publishing crime, thrillers, and horror. We’ll let you know what’s worked for us and what hasn’t. But that's only part of the conversation. We'd also like you to join in. Ask questions, share reactions, tell us what works for you.

One caveat – this is not a place to BSP. While we might mention how a technique worked (or didn’t) in one of our novels, this isn't the place to advertise your work. We want this to be a forum that helps us all become better writers.

NOTE: HUGE APOLOGIES TO EVERYONE WHO CAME TO READ MAX ALLAN COLLINS TAKE ON SUSPENSE AND DIDNT FIND IT. THE BLOG ADMINISTRATOR (THAT WOULD BE ME... LIBBY... HAS BEEN WITHOUT POWER... (THANK YOU COM ED...) SINCE TUESDAY. I HAD TO FLY TO NEW ORLEANS TO GET ELECTRICITY... AND I'M ONLY HALF KIDDING. SO SCROLL ON DOWN TO FIND MAX'S TAKE ON SUSPENSE, AND LET'S GET THE PARTY ROLLING AGAIN. STEPHEN GALLAGHER, OUR BRIT MEMBER, HAS ALSO WEIGHED IN. WE STILL HAVE A GREAT WEEKEND IN STORE FOR YOU.

Our first topic is -- not surprisingly – suspense. What technique of suspense is most effective for you… and why? Thriller author Joel Goldman, whose first Lou Mason novel, MOTION TO KILL, has just been republished as an e-book, leads off, followed by Libby Fischer Hellmann. On Tuesday, Vicki Hendricks reports in, and Wednesday, the one and only Max Allan Collins. Finally, on Thursday, UK author and screenwriter Stephen Gallagher weighs in. During the week you’ll hear from the rest of us in the comments section as well. So, grab your favorite beverage, pull up to the screen, and join in. We hope INSIDE TOP SUSPENSE will become your favorite place to hang out!

Joel Goldman here and thanks to Libby for kicking things off. Suspense depends on several things. First, the reader has to care what happens to the characters. If they don't, the payoff is nothing more than a curiosity. Second, suspense has to build slowly at first and then accelerate with a combination of inevitability and unpredictability. The payoff can be something the reader knows is coming but dreads or something the reader doesn't see coming that leaves her gasping and shouting Holy Crap! Finally, the mix of plot and character has to make sense, even if it involves characters making bad choices or events that strain (but don't break) credibility. Don't confuse suspense with suspension of disbelief. And it never hurts to make your prose sing and zing.

Libby, here. I agree suspense has to accelerate, but one of my favorite techniques -- which you can only use during moments of high suspense and/or action -- is something I call "Literary Slow Motion." It's what William Goldman did in HEAT where he spent something like 6 pages describing 18 seconds. I love to s-l-o-w down the action using as many sensory details as possible... ie the hero has been knocked to the ground, and he sees a boot coming at him, feels the snow and ice on his cheek, hears a laugh from the enemy, tastes blood in his mouth... etc. The more details you can add, the more the reader is invested, and hopefully is compelled to keep reading.

I have a question for you, Joel... or anyone. How far can you strain credibility? How much is too much?

From Vicki
I'll let someone else answer that question and go on with my tip for the day.
The most well-known and easiest to explain suspense technique, the only one that I know of with a name, is called “The Ticking Clock.” The writer sets a figurative clock ticking or, in the case of the TV series 24, a literal clock. Other examples: the cop is given 24 hours to find evidence on the murderer to avoid being accused, the woman has 2 hours to get an antidote for her snake bite, or the scuba diver has half an hour of air left, it’s getting dark, and murderers are on a boat above her, looking for her bubbles. The last one is from my novel Iguana Love, and it was a challenge to think of a way out for the character with that set up, but knowledge of equipment always offers possibilities, while underwater vulnerability and lurking creatures keep the reader turning pages. Once the time is set in any story, the reader’s subconscious will keep the clock ticking to heighten the tension in every scene.

From Stephen Gallagher
My take on suspense is a pretty straightforward one, I think. You have a character with whom the reader empathises, who needs to achieve something. Bad things are going to happen if he or she doesn't achieve it.

As they set out, everything seems set for success. But then obstacles arise - immediate, unplanned-for problems that have to be solved before your protagonist can move forward toward the greater goal. Meanwhile, the bigger situation deteriorates and the bad consequences loom larger.

Solving the lesser problem may get your protagonist closer, but gives rise to further problems that will impede progress even more. This is where the art comes in. Those problems have to be entertaining, and the effect of the delays and diversions has to be a pleasurable one. Suspense isn't about making the reader uncomfortable. It's about deferring closure in a way that heightens the anticipation of it.

The reader is trusting you to deliver an ultimate reward. But there's only a slim chance of success for your protagonist. And it gets ever slimmer, the closer you get to it. Will that slim chance disappear altogether just as you get there, or will your protagonist make it in time? For me that's the essence of suspense.

From Max Allan Collins
I don't really think in terms of suspense techniques. I am an instinctive writer and fairly linear, and just set up suspenseful situations and let them play out, as dictated by character. The most conscious craft decision I make along those lines is where to start and end chapters. Like many, if not most writers of msytery/crime fiction, I try to start at an exciting point. I was raised on Mickey Spillane, and his beginnings -- and for that matter his endings -- are always the gold standard for me. In KISS ME DEADLY, a beautiful woman, (naked but for a trenchcoat) jumps in front of Mike Hammer's car, to force him to pick her up, in the first paragraph. So I am very careful to start at an interesting, compelling point. That strategy works for the first chapter, but really every chapter. And the end of the chapter -- yes the cliff-hanger -- is equally important. The idea is to make the reader start reading, and keep reading.

Another technique -- really a strategy -- is to play against the reader's expectations. In a thriller there are certain conventional situations that can't be avoided, so giving them a fresh spin can keep the reader guessing and ratchet up the suspense. In the Nate Heller novel I'm working on, a very cliched moment arrives -- two thugs show up to take Heller for a ride to see a mob boss. But Heller knows these guys are killers and just goes Nancy Reagan on 'em ... just says no. He says he will follow them to the mob boss and will take the meeting, but will not get in the car with them. No violence breaks out, but the threat of it hangs over a very tense scene.

Posted by Libby Hellmann at 4:19 AM