How I Wrote KING CITY 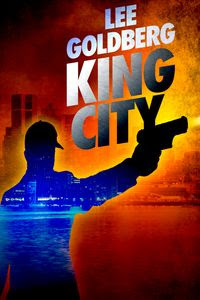 I've written over thirty novels, and my process with all of them was pretty much the same. I had an idea, I wrote a bullet-point outline, and I started writing the book, revising my outline along the way (I call them "living outlines," since I usually finish writing them a few days before I complete my manuscripts). But the process of writing KING CITY, my new standalone crime novel that was released today, was entirely different.

KING CITY began as a TV series pitch that I took all over Hollywood four or five years ago. It generated some interest but ultimately didn't lead to anything. So I put it in a drawer and moved on.

But the idea nagged at me anyway and I began to think KING CITY might make a better book than a screenplay. So, between MONK novels three years ago, I wrote 200 pages and a broad-strokes outline for the rest of the book.

I sent the proposal to my agent and began writing my next MONK book. The first place she sent KING CITY to was Penguin/Putnam, my MONK publisher, because she felt certain they'd snap it up. Between DIAGNOSIS MURDER and MONK, I'd written twenty-some novels for them. We knew that they liked me and my work, which had been successful for them, so we didn't think they'd see KING CITY as much of a gamble.

But they passed, surprising us both. My agent felt the rejection was less about me or the book than the way the business had changed. Mid-list authors were being dropped, editors were being fired, and the days of selling book proposals was over. If I wanted to sell KING CITY, I'd have to write the whole book and then shop it around.

I wasn't wild about that idea. If editors who knew me and my work well didn't find the first 200 pages compelling enough to merit an offer, I doubted that reading the whole novel would change their minds. And if these editors, folks I'd worked with for years, weren't willing to gamble on me, why would someone else? Moreover, after years of having contracts before I started writing novels, I was spoiled. The idea of writing a book entirely on spec made me uneasy, especially given my experience with THE WALK and WATCH ME DIE. Both of those books were written "on spec" and, after years bouncing all over New York, were finally published by Five Star, who paid a pittance for them. They got wide acclaim but not wide distribution. From a financial standpoint, they seemed to be a bust. I wasn't willing to go through that again.

So I tabled KING CITY and went back to writing one MONK novel after another.

But then something amazing happened - the ebook market took off, and I started earning tens of thousands of dollars on my out-of-print backlist, like THE WALK. It changed my thinking entirely about the publishing business. About the same time, my TV agent started nagging me to write a spec pilot.

Which got me thinking about KING CITY again.

So, last November, when I was once again between MONK books, I re-read the 200 pages and realized I had the makings of a great spec pilot. I stripped the story down to the bare elements, reordered events, dropped some characters, and rethought everything. Over the holidays, I adapted my unfinished novel into a screenplay. Actually, it ended up being two of them: one-hour pilot and the second episode. I sent both scripts off to my TV agent and began work on my next MONK.

The scripts got me some exciting meetings at studios and networks...but didn't pan out into any options on KING CITY or a series staff job (at least not yet).  But I realized I had more than just two strong scripts - if I put them together, I had a remarkably detailed outline for the book.

So I decided to write it during my next MONK hiatus.

Along the way, I made lots of changes. I liked most of the choices I'd made for the screenplay, which tightened the plot and gave the story more of a narrative drive, but I missed some of the more "novelistic" elements that I'd dropped. So instead of novelizing my screenplay adaptation of a novel, I found myself writing KING CITY all over again... for the third time.

It's been a very unusual experience for me. I feel that KING CITY has improved with each draft, whether in novel or screenplay form. Adapting the original, 200 pages into a script forced me to take a hard look at everything, to sharpen the characters and tighten the plot, stripping away all of the fat in favor of narrative drive.  That relentless and mercilous focus on character and lean story-telling may be great for a script but not so much in a book, where taking the time to establish a sense of place, and to explore the internal thoughts of a character don't slow things down, they enrich the experience. Adapting KING CITY back into a novel again allowed me to see where I might have cut too deep, over-simplified the characters, or moved events along too rapidly.

I finished the first draft two days before I had to begin writing my next MONK novel  and sent it off to some close friends for their comments. They gave me great notes, and by that, I don't mean enthusiastic praise. They told me what worked... and what didn't. I revised the book and submitted it to Amazon's Thomas & Mercer imprint. They immediately grabbed the book and published it in record time - it's out today, only a few months after submission, in digital, print and audio.

I like to think this is the best version yet of KING CITY. But you'll have to be the judge of that...
Posted by Lee Goldberg at 1:09 PM