This was written and published two years before Johnny Depp's Pirates of The Carribean in a Collector's Limited edition. Now it's on Cross Press - Kindle, Nook, Smashwords, etc - FOR ONLY $2.99.

Here's a review by Mel Odom: 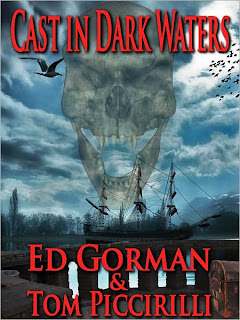 "This jim-dandy little novella is just begging for a sequel, and I don’t want to be kept waiting. Cast in Dark Waters seems like it just came out of nowhere, but it has a history as a limited release hardcover book from Cemetery Dance. I missed it then, but I’m glad I caught up with it now.

This is old-school pulp writing, folks, and it reads like something that would have come from the typewriter of Robert E. Howard or one of his contemporaries. The story is set in the Caribbean in the 16th century and feels like a pirate movie from the heyday of when Hollywood did them big and did them right. I love the current Pirates of the Caribbean stuff that’s going on now, but I still remember watching Errol Flynn in The Sea Hawk and being blown away.

The opening of the story is immediately intriguing, but it’s the female sea captain, Crimson, that steps onto center stage and owns the show. She comes in swinging, too, in a wild bar brawl that is a sheer pleasure to read and made me feel all of ten years old again discovering the pulp stories that shaped me into the man I am now. Growing up in southeastern Oklahoma meant there was a lot of cowboys architecture in my male role models, but thanks to the reading material I had at hand there was a lot of pirates, private eyes, and science fiction as well.

The relationship Crimson has with her father (although no one dares suggest to either of them that they’re related) is at once absorbing. Tangled relationships are great fiction fodder, and the one between Crimson and Welsh is a great one. But Gorman and Piccirilli don’t stop there. Crimson’s husband, Tyree, has gone missing on the island of Benbow, which is believed to be the home to nightmares and bloodsuckers. In this first story, we think we know what the truth is, but we don’t receive the final answer. And in that, the authors have us snared. I hope to see a sequel soon.

The seafaring action and the fights on the island are very well done. I felt like I was staying in step with Lady Crimson when she set sail and when she set foot on the island. The mythology of the things she’s hunting is very well laid out and I enjoyed the “almost knowing” everything that was involved. After all 16th century pirates don’t know everything we know these days.

The atmosphere is very well done and the Caribbean landscape and the lifestyle of a pirate are marked on every page. The authors did some good research and blend it seamlessly into their pirate-horror-adventure concoction.
Posted by Stephen Gallagher at 11:26 AM