A Publishing Revolution by Bill Crider


You know about the publishing revolution, don't you?  The one that was going to change the face of publishing as we know it?

Writers hardly anyone had ever heard of suddenly started selling millions of copies.  They couldn't get their books published by conventional means, so they went the new route, and the public couldn't get enough of them.

They were wrong in spite of the fact that the writers didn't get reviewed anywhere, not at first, anyway. Newspaper and magazine reviewers ignored them. It was as if they didn't exist, except that they were selling all those books.

The publishers got worried. They got even more worried when established writers started getting in on the deal. They didn't know how to respond, and some people thought they'd be run out of business. After all the new method of publishing was producing books in big numbers, and it was producing them for a lot less than the big-time publishers were charging.

Some people said the books were cheap in other ways, poorly written and full of sex and violence. Even after some reviewers started to mention them, the hoity-toity ones pretended they didn't exist. The books kept right on selling and selling and selling.

What I'm talking about here, by the way, isn't the digital revolution. It's a revolution that happened over 60 years ago when publishers like Fawcett got into the paperback original market. It might seem odd today, but some folks were sure that the sky was falling and that paperback originals would be the end of hardcovers.

It didn't work out like that. Hardcovers continued to sell, and paperback originals continued to grow in respectability.  Writers like John D. MacDonald, Charles Williams, Jim Thompson, and Harry Whittington, Vin Packer, and dozens of others produced work of lasting value for the paperback market.  We got some swell covers out of it, too. 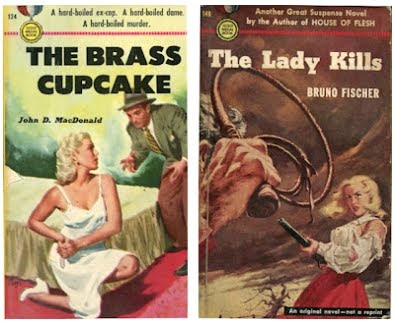 Which writers of e-books will be remembered 50 years from now? I don't know, but I'd like to think that the members of the Top Suspense Group are among them. Maybe someone reading this can write about it in whatever form of communication that's around then. I hope someone will.
Posted by Unknown at 5:00 AM