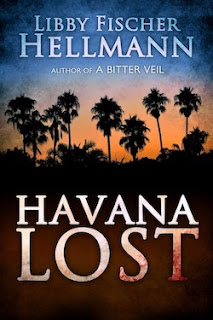 Libby Hellmann used to get jealous when she was a little girl in the 1950s and her parents flew down to Havana to gamble. She begged them to take her along. They didn’t, and in 2012 she finally go to go with her own daughter. The result of her trip was HAVANA LOST, the third in her so-called Revolution Trilogy.

Here’s more about the book:

On the eve of the Cuban Revolution, headstrong 18-year-old Francesca Pacelli flees from her ruthless Mafia-boss father in Havana to the arms of her lover, a rebel fighting with Fidel Castro. Her father, desperate to send her to safety in the US, resorts to torture and blackmail as he searches the island for her.

So begins the first part of a spellbinding saga that spans three generations of the same family. Decades later the Pacelli family is lured back to Cuba by the promise of untold riches. But pursuing those riches brings danger as well as opportunity, and ultimately, Francesca must confront the lethal consequences of her choices. From the troubled streets of Havana to the mean streets of Chicago, HAVANA LOST reveals the true cost of chasing power instead of love.

HAVANA LOST is award-winning author Libby Fischer Hellmann’s tenth novel and third thriller that explores how strife and revolution affect the human spirit. HAVANA LOST is a testament to Hellmann’s gift for authentic historical detail as well as her talent for writing compulsively readable thrillers.

Here's what people are saying about it:

“Hellmann is already an icon of the Chicago mystery scene. In HAVANA LOST she heads in a bold new direction and masterfully evokes a Cuba past and present in a heartrending tale..."
Sean Chercover, author of THE TRINITY GAME

“Hellmann offers readers a literary tour de force… a story lush with details of another place and time and lovers whose stars are tragically crossed. The writing in this thriller will take your breath away."
William Kent Krueger, author of ORDINARY GRACE and the Cork O’Connor series

"An engrossing tale of love, betrayal and revenge that spans three generations of remarkable women. Hellmann beautifully captures the scents sounds and feel of Cuba before and after the revolution."
—Zoë Sharp, author of the best-selling Charlie Fox crime thriller series

“Libby Hellmann is a master at crafting an engrossing read. HAVANA LOST is exceptional; the novel intrigues you from the get-go and keeps you turning pages 'til the last.”—Heather Graham, NY Times Best-selling author of the KREWE OF HUNTER series

“After Fidel took over and Cuba turned Communist,” Libby says, “the island was suddenly off limits to most Americans. “Because of that, Cuba seemed more mysterious and exotic. Then, of course, came the Bay of Pigs, then the Cuban Missile Crisis, which made Cuba even more impenetrable.” Libby also recalled one of the Godfather films where Al Pacino (Michael Corleone) and Lee Strasberg (Meyer Lansky) are on a Havana rooftop discussing how they’re going to own the island. Shortly after that, Michael sees a rebel willing to die in order to overthrow Batista. "That clinched it. All I needed was a strong fascinating female character to base the story around, and I found her in Mafia princess Frankie Pacelli. The rest, as they say, is history.”

The book, which has over 15 reviews on Goodreads, is out today, August 16. You can find it in print at all the usual suspects, in audio here, and in ebook at Amazon. For more information, including a "Glossi" digital magazine about Cuba, she invites you to her website.
Posted by Libby Hellmann at 10:59 PM