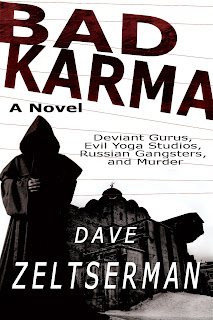 The signs in front of the yoga studio were innocuous enough in the way they advertised new approaches to achieving well-being and stress relief. Several blown-up photos showed classes filled with young women, all seemingly in a state of bliss as they stretched in the same manner and direction.

Shannon walked down half a dozen steps, opened the front door and entered a small vestibule where he was assaulted by a pungent overly-sweet odor. The smell seemed like a mix of musk and marijuana. He wasn’t sure what it was, but it was more powerful than any incense he had ever encountered and the air was thick with it.

From behind a set of curtains he heard people chanting in a low monotone. Something about Vishna being the one and true source. A woman stepped quickly through the curtains to meet Shannon. She was dark-haired, short, petite, in her early twenties and wearing yellow leotards. Her eyes were wide open and expressionless as she stared at Shannon in the same manner a morgue worker might look over an incoming body that needs to be catalogued. Then, nodding to herself as if she had finished sizing him up, she told him Vishna Yoga would not be for him.

“What we do here would not be right for you. I am sorry, but it would be a waste of your money.”

“Why wouldn’t it be right for me?”

“Your energy is all wrong. Please leave.”

Shannon was taken aback by the woman’s reaction to him. To bide time, he picked up a brochure from the counter and started to thumb through it. Inside was a picture of their founder, Vishna the One True Source. He was a few years older than Shannon, maybe forty, with a shaved head, brownish skin and sharp features that were made even sharper by his piercing black eyes.

Shannon tried to act oblivious to the way the woman was staring at him and read aloud the marketing hype from the brochure. “Stress relief, improving my self-image, better sense of well-being.” Smiling, he added, “This sounds like what I’m looking for.”

“I am telling you this would be a waste of your money. There is nothing we can do for you.”

Shannon gave her a hard look. “What if I stay to observe a class,” he said.

“Leave now or I will call the police.”

“I think I can stay for one class.”

An Asian woman, also very young, poked her head through the curtains and stared at Shannon with the same empty look in her eyes. With reinforcements now in place, the woman in the yellow leotard bent her knees, tensing, as if she were going to spring at him. A vein had started beating along her neck.

Shannon took a step back. “You know,” he said, “this isn’t doing much to help my stress. Or my well-being, for that matter.”
Posted by Dave Zeltserman at 11:07 AM