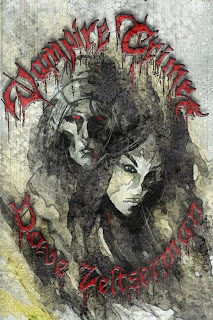 Vampire Crimes has a long history dating back to 1997. Back then I had written Fast Lane and Bad Thoughts and was working with my first agent in the hopes of selling both of these books. This guy gave me a biker vampire screenplay to novelize which I didn't care for, but it got me thinking of some ideas for a very gritty & noirish vampire series, kind of a Mickey Spillane merged with David Goodis with very strong horror elements, and I set about writing my own screenplay for something that I thought would be good and would be something I'd want to novelize. What I came up with was a bit like Sin City with vampires, although I hadn't heard of Sin City back then. This agent didn't like that I did this, and we parted ways, and I put this script aside with the thought of doing something with it someday.

Flash forward to 2006. I'd just finished writing Pariah & the Caretaker of Lorne Field, and my Vampire Crimes script had been on my mind for years and I was itching to do something with it, so this became my next project. The book came out better than I had anticipated, easily the most noir, grittiest (and most violent) book that I'd written, and maybe one of my better written books also. My agent at that time had her hands full trying to sell Pariah, Outsourced & Caretaker, so she didn't want to take this one on also, so I put it aside. I did have my core readers look at it and got a strong reaction from them, although a couple of them found the horror elements very upsetting and disturbing. I also had a fellow Rara Avian (a yahoo group of noir & hardboiled aficionados) who was also a big Charlie Huston 'Almost Dead' fan read it, and he was very excited by this book. I had avoided Huston's vampire series since I had this book in mind for a long time and I didn't want to subconsciously steal from him. The way this Rara Avian described the difference between the two books is that Huston's book is a horror novel with a hardboiled PI while mine is a gritty crime noir novel with vampires.

Flash forward to 2009. I have a new agent now, I send him Vampire Crimes after he sells Essence, and he's excited by it. He thinks it's great and should be an easy sale. He sends it out, and a bunch of young editors are also excited by it, but none of them are able to get approval--either there's a competing vampire novel by a more senior editor, or there's fear that book is too noir and too much of a horror novel. Plus things are starting to go south with the publishing industry and it's getting tougher to sell anything. So Vampire Crimes doesn't sell.

So here we are now. I have no doubt that fans of my other crime novels are going to love Vampire Crimes, as well as fans of Sin City, and and really anyone who likes tough & gritty & violent crime and horror novels, and so I'm going to put it out myself as a Kindle and Nook download, and it should be available later this week.

Ultra violent & ultra noir. These are not your Mother's or daughter’s vampires.

Jim is infected. Carol, is not. Together they travel the country hunting down only the worst degenerate predators. After all, Jim has to feed.

Meanwhile Jim's ex Serena and her posse of Eurotrash vampires spend their days snorting heroin and their nights at Manahattan’s trendiest nightclubs. Serena is still seething. Hell hath no furry like a woman scorned? Try a scorned bloodsucker!

Metcalf, author Dave Zeltserman’s scariest psychopathic creation to date, runs a vampire compound in the LA desert and rules it with an iron fist. Metcalf seeks a cure for the vampire virus. Not because he cares about humanity. Metcalf is sick of drinking blood. He wants to eat a cooked steak and down a case of cold beer.

Jim, Serena and Metcalf careen toward their inevitable collision, and when a vengeful biker gang is thrown into the mix, the climax that follows is pure rock ‘n roll violence.

‘I've just read the manuscript of Dave Zeltserman's new novel, Vampire Crimes. This is one of the few fresh takes on vampirism I've read in years. It's as if Charles Bukowski sat down and said, OK, Bram Stoker, how about this?’ -- Ed Gorman, author of Cage of Night and The Poker Club.