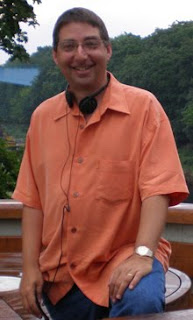 Lee is a two-time Edgar Award nominee whose many TV writing and/or producing credits include Martial Law, SeaQuest, Diagnosis Murder, Hunter, Spenser: For Hire, Nero Wolfe, Missing, Monk and The Glades. His many fiction and non-fiction books include The Walk, My Gun Has Bullets, Successful Television Writing, The Man With with The Iron-On Badge and the Diagnosis Murder and Monk series of original mystery novels. As an international TV development consultant, he's worked for production companies and broadcasters in Canada, Germany, Spain, Sweden, and the Netherlands. He currently serves on the board of directors of the Mystery Writers of America and is the co-founder of the International Association of Media Tie-in Writers.

Lee: I’ve always been one….it just took a while for everyone else to notice. When I was ten or eleven, I was already pecking novels out on my Mom's old typewriters. The first one was a futuristic tale about a time-traveling cop born in an underwater sperm bank. I don't know why the bank was underwater, or how deposits were made, but I thought it was very cool. I followed that up with a series of books about gentleman thief Brian Lockwood, aka The Perfect Sinner, a thinly disguised rip-off of Simon Templar, aka "The Saint." I sold these stories for a dime to my friends and even managed to make a dollar or two. In fact, I think my royalties per book were better then than they are now.

I continued writing novels all through my teenage years. Some of my other unpublished masterpieces featured a hapless detective named Kevin Dangler. Being a packrat, I still have most of those novels today in boxes in my garage (some were destroyed in flooding a few years back).

By the time I was 17, I was writing articles for The Contra Costa Times and other San Francisco Bay Area newspapers and applying to colleges. I didn't get a book published, but my detective stories got me into UCLA's School of Communications. My grades weren't wonderful, so I knew I had to kick ass on my application essay. I wrote it first person as a hard-boiled detective story in Kevin Dangler's voice. The committee, at first, had doubts that I actually wrote it myself -- until they reviewed articles I'd written for the Times, including one that used the same device as my essay. Once I got into UCLA, I put myself through school as a freelance writer...for American Film, Los Angeles Times Syndicate, UPI, Newsweek. Anybody who would pay me. I had a girlfriend at Playgirl and she got me a gig writing sexually explicit Letters-to-the-Editor at Playgirl for $25 each.


TSG: Describe yourself as a writer?

Lee: My Visa, American Express, and mortgage bills. You may think that’s a joke, but I make my living as a writer. If I don’t stay focused, I don’t get paid and my family doesn’t eat.

I'm influenced by good writing, whether it's on TV or in books. I find reading a Robert B. Parker novel can get me into the "rhythm" of writing, then again, so can watching an episode of Justified or Dexter. I do notice, however, that my writing is always better if I am reading a novel at the same time that I am working on something. But when I am on a deadline, I feel guilty if I am reading a book, because that's time I should be spending at the computer. So I often have to force myself to read in the midst of writing.

Lee: You mean my first book sale? As I mentioned before, I put myself through school writing freelance articles. And that's sort of how my first novel came about.

I had a journalism advisor at UCLA who wrote spy novels. We became friends and talked a lot about mysteries, thrillers, plotting, etc. One day in the early 80s his publisher came to him and asked him if he’d write a “men’s action adventure series,” sort of the male equivalent of the Harlequin romance. He said he wasn’t desperate enough, hungry enough, or stupid enough to do it…but he knew someone who was: Me. So I wrote an outline and some sample chapters and they bought it. The book was called .357 Vigilante I wrote it as “Ian Ludlow” so I'd be on the shelf next to Robert Ludlum and had plenty of Letter-to-the-Editor-of-Playgirl quality sex in it.

The West Coast Review of Books called my literary debut "as stunning as the report of a .357 Magnum, a dynamic premiere effort," singling the book out as "The Best New Paperback Series" of the year. I ended up writing four books in the series. Naturally, the publisher promptly went bankrupt and I never saw a dime in royalties.

But New World Pictures bought the movie rights to .357 Vigilante and hired me to write the screenplay. I didn’t know anything about writing scripts…luckily, I had a good friend who did, William Rabkin. We worked together on the UCLA Daily Bruin. So the two of us teamed up. The movie never got made, , but I enjoyed screenwriting. So Bill and I wrote a spec episode of the TV series Spenser For Hire. Much to my shock and delight, the producers bought the script and shot it as written…and then hired us to write three more episodes. My TV career took off after that.but we had so much fun that we were writing partners for over 20 years…and remain best friends to this day. (He writes the novels based on the TV series Psych). The Vigilante books are out now as ebooks under my own name and retitled as "The Jury Series"... Judgment, Payback, Adjourned, and Guilty.

Around the same time, I sold a book to McFarland & Co. called Unsold Television Pilots (I guess I should use the term "sold" loosely, since McFarland didn't pay advances). It was an encyclopedia of every TV series concept rejected by the networks from the dawn of television up to 1989. I started writing the book when I was nine years old. The book was an immediate hit, stayed in print for over a decade, led to a paperback abridgment (now available on the Kindle), and was the basis for two network TV specials that I wrote and produced -- The Greatest Shows You Never Saw for CBS and The Best TV Shows That Never Were for ABC.

Lee: Still getting paid for it. Think about it. I am actually getting paid to sit around and make stuff up. It doesn't get any better than that.
Posted by Dave Zeltserman at 6:19 AM