Giving The Devil His Due

Probably the most common question writers are asked is "what made you start writing crime fiction?" I've always answered that I could tell you how and when I started writing, but, aside from the fact that I've ingested a steady diet of thrillers and mysteries over the years, I was never exactly sure why I felt compelled to write. 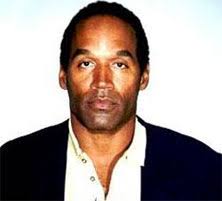 Well, thanks to the events a few years ago when he was arrested in Vegas for trying to steal his own memorabilia (a Catch-22 in which truth really is stranger than fiction)  I now know the reason. In fact, it was one of those smack-yourself-on-the-forehead, how-could-I-have-been-so-stupid moments.

It was OJ. Or, more accurately, the OJ trial. Remember? Back in 1995 he went on trial for murdering his wife, Nicole.

I was free-lancing then, and I had a flexible schedule. So I was able to watch a lot of the trial, which began pretty much at the beginning of the year. I remember being glued to the TV, and what I remember most was the theater: a hideous crime, a compelling story, eccentric characters, drama, conflict—in other words, everything you could want in a crime novel.

First there were the characters. Central Casting couldn't have come up with a better collection: the earnest but scattered female prosecutor, the urbane, witty defense lawyer, the dullard judge who yielded control to everyone, the racist cop. There was even a California surfer dude, the requisite expert witnesses, as well as the avuncular king of defense lawyers. 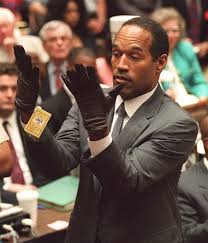 Then there were the forensics. I knew nothing about police procedure when I started watching and less than nothing about forensics. DNA tests, blood spatter, the bloody glove, the timing—all those issues opened up a new world for me. And when the defense suggested that some of the evidence had been mishandled... maybe even manipulated—well, that played to all of my latent conspiracy theories, not to mention my tendency to rebel against authority.

Finally, of course, there was the denouement. How absolutely noir an ending it was! The victims are denied justice. The bad guy goes free. Chandler or Ross McDonald couldn't have done it better.

I remember how swept up I was in the day to day events. I remember screaming at Marcia Clark to object when Barry Scheck made a salient point... I remembering calling my husband, a lawyer too, to rant and rave... I even remember the nagging feeling that the real issues were being buried and obfuscated (although I wasn't sure how or why). The only other seminal event I was involved in to that degree was the broadcast of the Watergate Hearings in 1973 (I worked for public television and was part of the crew who broadcast the hearings at night.) In retrospect, actually, I find it curious that I was more emotionally involved in the murder of a woman than in a President who tried to subvert the constitution. But that's another blogpost.

I'm sure it was the denial of justice... the fact he got away with it... that justice was NOT served... that stayed with me. It wasn't a conscious decision, of course, but the verdict came down in October of 1995, and by spring of 1996 I'd written my first mystery. It was a police procedural, btw, about the murder of a female judge who was also president of her synagogue. It was never published, and it shouldn't be. Still, I kept going and eventually published the Ellie Foreman series.

In a way, I've been hesitant to own up to this, because who wants to give the devil his due? At the same time, though, I have to admit that OJ had a tremendous impact on me. I can even say he changed my life.What about you? What inspired you to write—or read—crime fiction?
Posted by Libby Hellmann at 12:01 AM