With A Little Help From My Friend...


One of the most common questions crime fiction authors are asked is whether we outline our stories or write “without a net”, i.e. not knowing what’s going to happen next.

I’ve done it both ways, but I lean toward the “without a net” camp. That’s not to say I haven’t outlined. The first two novels I wrote were carefully outlined, down to each chapter. The problem was they read that way. I ended up writing the outline instead of the story. The outline was in charge of what, where, when, and how my characters behaved, rather than the characters themselves. There was no room for them to change their minds or try something different; consequently, in the end some of their actions didn’t make sense. Those books were never published, btw, and they should never be.

Then a very wise editor encouraged me to write without a net. We had a long conversation about how I needed to trust my characters, that if they were truly fleshed out, they wouldn’t let me down. My first reaction was: “Are you nuts? I created them. They do what I tell them to.”

“Actually, they don’t,” she replied in a serious voice. “Try it.”

Imagine my surprise when I discovered she was right. It took me a while to get over my panic and actually sit down without a plan for what was going to happen, but eventually it started to percolate. Characters did things I never planned. Say things I didn’t expect.  Some even said they weren’t involved in the crime, and why was I trying to implicate them. At times, the process was so baffling that I felt like Shirley MacLaine, channeling spirits from the other side. I was even more puzzled when I’d introduce a character or write a scene without knowing why I was doing it or why it was important.  Part of my brain would ask myself what in the world this had to do with my story? The other part of my brain said not to worry. Sure enough, about 150 pages later, the answer would come. My subconscious had been working on it all that time. It was almost spooky.

Eventually I adopted what I call a “modified netless style.” I would start out knowing the crime and the victim. I also thought I had an idea who the perpetrator was, and I would have in mind two or three “tent-pole” scenes, where important information is revealed, that I’d write toward.

The risk of this style of writing is that you start to like the perpetrator, or you find so many redeeming qualities that you decide he or she couldn’t have done it. Then what? How do you resolve the story?

That’s what happened in A BITTER VEIL. Although it’s written on the large canvas of Revolutionary Iran, in some ways VEIL is really a locked room mystery. There are only 4 or 5 characters who could have committed the crime, and in the process of writing the book, I toggled between each one. At first I thought the villain was Character A, but then I started to like A. So I turned to character B. Then B did a noble thing. So I switched to C, but they couldn’t have done it because...

You get the picture. This went on through the entire first draft. In fact, when I  got to the place where I had to reveal the culprit… I didn’t have one! I’d written myself into a corner. 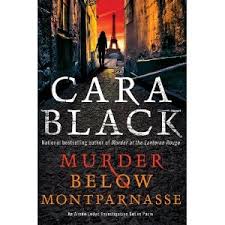 I panicked. I’d written an entire book without a villain. At that point the only ting I could think to do was call my friend and fellow author Cara Black, who, for the one or two people in the world that don’t know, writes the award-winning Amy Leduc Investigation mysteries set in Paris. (And has just come out with a new one which you can find right here. And which I think it is one of her best.)

Here’s how: We spent ninety minutes on the phone, going over each major character: their behavior, their possible motivations, their conflicts. How they related to the victim, each other, and the revolution. Slowly, the villain began to emerge. Yes, I did have to go back and rewrite a few things, but not as much as I thought. The most surprising part was what I call the “inevitability factor.” In making revisions, I realized that, of course the killer was this character. It couldn’t have been anyone else.

So, will I continue writing without a net? Absolutely. I loved that the villain was as much of a surprise to me as I hope it will be for readers. I’m not sure about Cara, though. The conversation was more valuable than therapy (at least for me) and she had to be as exhausted as I was afterwards. She’ll probably charge me a fee next time.

I don’t mind. It was worth it.