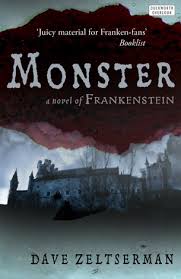 Dave Zeltserman’s Monster cleverly and chillingly reanimates a classic tale. Friedrich Hoffman, the so-called monster, recounts how he was falsely accused of killing his fiancée, tortured and killed for his crime, and awoke on the lab table of Victor Frankenstein a man with all manner of gruesome plans. We see inside Friedrich's mind as he embarks on a single-minded quest for vengeance; but at what cost to the remnants of his humanity? Intense and gothic, Monster depicts nineteenth-century Europe in a blaze of depravity, excess and supernatural terrors, in an ingenious tribute to one of literature's greatest works.

We asked Dave why he wrote the book:

Sometimes an idea will pop into your head that just won't leave you alone. That's what happened to me when I had the idea of writing a retelling of Mary Shelley's Frankenstein where everything a dying Victor Frankenstein told Captain Walton aboard the icebound ship was a lie to protect his reputation, and the monster now gets to tell the real story. A year later this idea continued to nag at me, and after another year and reading about thirty books for research this idea had turned into a story that I wanted to write. In my version, Victor Frankenstein would be in league with the Marquis de Sade to bring hell to earth, and the monster would be remain a tragic, albeit heroic, figure. Thematically the book would be about the corrosive quality of vengeance, as well as a repudiation of de Sade's central theme of man being only a base animal. While I knew there were many readers who consider Shelley's great novel a sacred tome and would look at any retelling as blasphemy, at this point this was a novel that was burning too deeply inside and was one I had to write.

Although Monster was released earlier this year, it continues to garner places on Must-Read Horror Lists, including:

And reviews have been nothing less than raves:

"An impressive achievement: He manages the difficult trick of creating a voice that sounds authentically like Shelley's while remaining entirely lucid to the contemporary reader ... You don't get much more gothic bang for your buck --Los Angeles Times

As stated above, the hardcover and ebook versions of Monster have already been released. The French version came out over the summer, and the paperback version will be out in early 2014.

If you’re a horror aficianado, Monster is for you!
Posted by Libby Hellmann at 6:21 AM