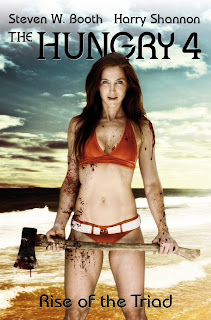 Best-selling Top Suspense member Harry Shannon is one of the most versatile member of our group. He writes horror (i.e. Zombie), sci-fi, dystopian, and mystery fiction. Plus, he’s a well-known musician (and his teen daughter Paige is already taking after her father). So when Harry has a new book out, it’s a reason to celebrate.

Harry’s newest is TheHungry 4: Rise of the Triad. It’s part of the Sheriff Penny Miller Series, but it’s also a new twist for Penny and Harry. Here’s the description:

Small town Sheriff Penny Miller and her outlaw friend Scratch somehow managed to survive a nuclear blast in Nevada and then a brutal attack on their peaceful lodge in Colorado. They head for Los Angeles, looking for a fresh start. The citizens of Southern California remain blissfully ignorant of the coming war. They believe the zombies are simply an urban legend.

When they find themselves in a suspiciously run Malibu rehab facility, Miller can't relax. She knows the gore is about to hit the fan. Miller can sense when zombies are near. And they’re almost always near.

When all hell breaks loose, Miller and Scratch must endure deadly experiments, resist an ongoing government conspiracy, and battle another horde of ravenous zombies.

And that’s just for starters.

The Hungry series began with a short story called Jailbreak, Harry says, which was created for a charity anthology about zombies. “I asked Steven W. Booth, who was just beginning to write, if he wanted to collaborate. The story went up free on Amazon and got downloaded tens of thousands of times, so we wrote a novel called The Hungry. Best selling zombie author Joe McKinney contributed the introduction. Those sales were also great and launched an entire series. Sheriff Penny Miller of Flat Rock, Nevada is one hell of a lot of fun to write. She has a sailor's mouth, but a heart of solid gold. Her novels feature lots of black humor, action and gore. Collaborating at this length is rather new to me, but I really enjoy it, so The Hungry 5 is already in the works, You don't have to read these in order, by the way, but it helps.”

Rise of the Triad is already getting fabulous reviews, including these from prominent reviewers and authors:

"Like getting a bag of Halloween candy after a six month fast." -Frank Errington, Horrible Book Reviews

"Not just wall to wall action, but balls to the wall intense." -Steve Hockensmith, author of Pride and Prejudice and Zombies

"I loved it from the first line." -Joe McKinney, author of Dead Cit

The Top Suspense Group is proud to count Harry Shannon as one of our members. You definitely need to check out The Hungry 4.
Posted by Libby Hellmann at 2:05 PM