FRONTLIST FEATURES: What Doesn't Kill Her by Max Allan Collins 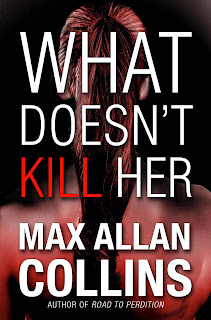 Of all the members of Top Suspense, Max Allan Collins has to be the most prolific. (Just take a look at this). He’s ALWAYS got a new book coming out— frankly, the rest of us envy his productivity, but that’s another story.  So it’s not surprising that Max has a new novel coming out September 17.

WHAT DOESN’T KILL HER tells the story of Jordan Rivera, who was an ordinary kid with an ordinary family – until a vicious killer took it all away from her, sparing her and leaving her broken. The murders destroyed something inside Jordan and she spent ten long, silent years in an institution. Catching a glimpse of a news report about another ordinary family slain, Jordan breaks her silence. Now she’s out, and she molds herself—body and mind—into an instrument of justice.  While a young detective pursues the case on his own, Jordan teams up with members of her Victims Support Group, people like her, damaged by violent crime. They have their own stories of pain, heartache, and vengeance denied. With their help, Jordan will track down the killer before he can ravage any more lives. Her own life depends on it.

When we asked Max why this story, here’s what he said: “For my first novel with Thomas & Mercer, I wanted to step away from the historical and private eye genres I’m best known for, and do a straight thriller. I also wanted to get away from the procedural nature of the CSI, CRIMINAL MINDS and BONES novels that Matt Clemens and I have done featuring super-star forensics teams, including our own J.C. Harrow novels. The notion fascinated me of real people, members of a Victims of Violent Crimes support group, teaming up to use their own various everyday skills to track down a killer. Also, I’d been toying with doing an American variation on the strong damaged female protagonist of GIRL WITH THE DRAGON TATTOO, and this seemed a perfect opportunity.”

"What Doesn't Kill Her is a kick-ass thrill ride from page one. This is the American answer to The Girl with the Dragon Tattoo." – John Gilstrap, author of High Treason and Damage Control

“Another winner from a fine writer.”  Not the Baseball Pitcher

"Collins weaves a compelling story with strong characters: Jordan, several members of her victims support group, and Mark Pryor, a high school crush recently made detective who pursues the case on his own time. Jordan is torn between her desire to destroy the killer on her own and identifying with the other victims, accepting their help. There are lots of interesting twists to keep the story moving briskly." Karen Musser Nortman"

You can find WHAT DOESN’T KILL HER at Amazon in ebook and print. Audio too. And while you’re at it, check out a couple of other works in the pipeline: EARLY CRIMES (Perfect Crime), which collects three early pieces by Max -- a short story, a novella, and a previously unpublished novel. And ASK NOT, a new Nate Heller thriller, the third in his JFK trilogy, will be out in October. It deals with the statistics-defying number of witness deaths that followed the assassination.

See? Prolific. And Amazing.
Posted by Libby Hellmann at 1:30 AM