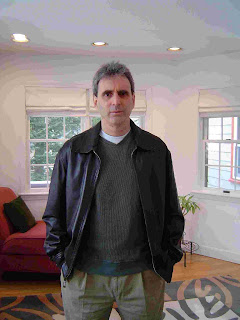 Dave lives in the Boston area with his wife, Judy, and writes crime, mystery and horror novels. Dave won both the Shamus and Derringer awards for his novella, Julius Katz. His crime novel, Small Crimes, was named by NPR as one of the 5 best crime and mystery novels of 2008, and his novel, Pariah, was named by the Washington Post as one of the best books of 2009. His horror book, The Caretaker of Lorne Field, received many rave reviews, including a starred review from Publishers Weekly, who called it "a superb mix of humor and horror." His upcoming novel, Outsourced, is currently in development by Impact Pictures and Constantin Film.

Dave: Growing up I was very strong in math and computer science, and that was my interest and my area of focus. But I always read a lot, everything from the classics to fantasy to sci-fi to mysteries and crime fiction, often times reading a book a day, and often found myself drawn to writing short stories. Even in college where I was majoring in applied math and computer science and could take precious few English course, one of the courses I took was in creative writing, but being more of a math guy I never really thought I had the right to be a writer.

In high school I discovered Ross Macdonald and quickly devoured all the Lew Archer books. I loved the sins of the father themes that he used with all this guilt and darkness hiding in suburban America, and when I tried writing short stories I wrote really bad Lew Archer-type stories. Fortunately I possess one of the most critical skills a writer needs, and that’s recognizing when my writing is bad, and I knew all these early stories were awful so I never sent any of them out. Later when I was working as a software engineer I discovered Jim Thompson’s Hell of a Woman, and that was like a religious experience. Not just that he wrote from the mind of a crazy killer, but in how he seduced the reader into wanting to believe that this cold-blooded killer has some hope for redemption, and also in the chances Thompson took with his writing. The two schizophrenic streams of consciousness at the end of Hell of a Woman were mind-blowing, Reading Thompson made me realize a writer could break any rule and do what they wanted as long as they made it work. This had me rewriting one of my bad Lew Archer-like efforts, but going at it from a different direction, and writing what would become Fast Lane. At times I was aping Jim Thompson, but mostly I was finding my own voice, and a crazy fever took over while I was writing this book, something that had never happened before, and there was no turning back after that.

Dave: Story is everything to me. I want to give my readers a fast-paced involving story with plenty of twists and surprises and a satisfying ending. And I guess I want to also challenge my readers at times, take them places they haven’t been before, turn the traditional tropes on their heads. My latest crime novel, Killer, certainly challenges readers with their perceived notions of their crime fiction heroes that they want to root for, as does Pariah. My novel, The Caretaker of Lorne Field, appears to be a deceptively simple horror novel, but challenges the reader with its themes of sacrifice vs. selfishness, belief vs. logic and cultural tradition vs. modernity. Even my first book, Fast Lane, suckers the reader into believing they’ve picked up a standard hardboiled PI novel before dragging them into a psycho noir hell that’s also every bit as much a deconstruction of the hardboiled PI genre.

Stylistically my writing tends toward lean and sparse, and no matter how dark the material, humor seeps in, even if it’s pitch black humor.

Dave: I’m sure at some level I’ve been influenced by every writer I’ve read, as well as the 1000s of comic books I read in my youth and 1000s of hours of Twilight Zones and similar shows that I watched. My Shamus-award winning novella, Julius Katz, was clearly influenced by Rex Stout, whose Nero Wolfe books I love. Fast Lane was influenced equally by Jim Thompson and Ross Macdonald, and years after writing it I found out that the plot has strong similarities to the last Lew Archer book Ross Macdonald had been working on. NPR when picking Small Crimes as one of the five best crime and mystery novels of 2008 talked about what they saw as a James M. Cain influence, which I won’t argue with since Double Indemnity is one of my favorite crime novels, although after picking Small Crimes up years after writing it, I saw more a Dan Marlowe influence that I hadn’t been aware of when writing the book. Although The Caretaker of Lorne Field isn’t a crime novel, Library Journal wrote of a Dashiell Hammett influence in their review, which I’ll also take since Hammett is my favorite crime writer—I marvel at the 5 books and Continental Op stories that he wrote.

Dave: They’ll all over the place. With Fast Lane, it was from listening to a radio show where a PI talked about a case that went badly. With The Caretaker of Lorne Field it was these very persistent weeds growing in my front yard. With Small Crimes, it was reading two different newspaper stories—one about a corrupt cop who committed a crime similar to my noir hero, Joe Denton, the other about a very corrupt Sheriff’s office in Denver in the 60s. With Pariah it was being fascinated by stories of Whitey Bulger and the South Boston mob for years and then being pissed off enough at NY publishers for giving these mobsters big book contracts to write their tell-all books. For anyone who hasn’t read Pariah, while at one level it’s a dark crime novel, at another level it’s a satire on the NY publishers. There was no way any NY publisher would've ever touched Pariah, but fortunately a London publisher, Serpent's Tail, was only too happy to publish it!

While I was in my crazed fever writing Fast Lane, the owner of Spenser’s Mystery Bookshop gave me this flyer from a new startup magazine called New Mystery, where they were looking for tough crime fiction. I wish I still had this flyer. They were asking for stories that were like a shot of bourbon instead of a swig of Maalox, stuff like that. Anyway, when I got home I spent a couple of hours writing the type of story they were asking for, which became A Long Time To Die. I sent it in, and they bought it for $35. So I sold the first story I submitted. My second sale was harder where I kept sending Gary Lovisi at Hardboiled stories until I wore him down and he bought one. After that it was all downhill until I sold Fast Lane, almost 10 years later, and that was sold first to an Italian publisher, Meridiano Zero.

Over the last few years a lot of good stuff has happened to me. I’ve sold four book to Serpent’s Tail, which is a publisher I’ve had great admiration for for years. I just won the 2010 Shamus Award for my novella, Julius Katz. I have a film deal for Outsourced where the script has been approved and the financing is set. Small Crimes was named by NPR as one of the 5 best crime and mystery stories of 2008. Small Crimes and Pariah made the Washington Post’s best books list for 2008 and 2009, respectively. I’m getting great reviews from major newspapers and am starting to get a good number of foreign deals for my books. All of this has been very exciting, but none of it matches the thrill I got from that first sale to New Mystery Magazine for $35.
Posted by Dave Zeltserman at 9:37 AM