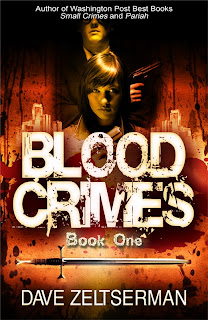 "I've just read the manuscript of Dave Zeltserman's new novel, Blood Crimes. This is one of the few fresh takes on vampirism I've read in years. It's as if Charles Bukowski sat down and said, OK, Bram Stoker, how about this?" -- Ed Gorman, author of Cage of Night and The Poker Club.

Blood Crimes is a genre-bending collision of horror and noir that rides shot-gun with homicidal lovebirds Jim and Carol as they carve a bloody path cross-country. Jim is infected with the vampire virus. Carol isn't. Yet. But they are united in their hunt for degenerate scum for Jim's dinner menu -- so he can quench his bloodlust without harming the innocent.

Coming after them is Jim's ex, Serena, and her posse of heroin-snorting Eurotrash vampires - as campy and hilarious as they are terrifying. Serena has sworn vengeance: Hell hath no fury like a she-vampire scorned!

And then there’s Metcalf, a sociopathic monster unlike any you’ve met before who enslaves fellow vampires in a compound straight out of Hieronymus Bosch - a living hell where he conducts unspeakable experiments to find a cure for vampirism. Not because he's benevolent - but because he's bored with a diet of fresh blood, and wants to eat a grilled steak and down a case of cold beer.

Jim, Serena and Metcalf careen toward their inevitable collision in a climax of pure rock 'n roll violence that leaves other anemic vampire fables out in the twilight.

Blood Crimes is the first book of a planned 5-book original e-book series, and is now available for $2.99 as Kindle download, Nook download or from Smashwords.

Reading a sample of Blood Crimes (or any TSG Book) is now easier than ever. For Blood Crimes, go to Top Suspense, click on Crime, then on the cover of Blood Crimes, and you can start sampling Blood Crimes right away on the Kindle browser that comes up.
Posted by Dave Zeltserman at 6:07 AM