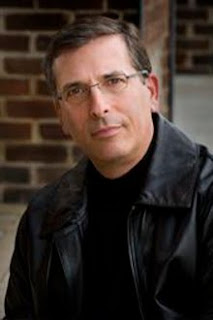 I started writing thrillers when one of my former law partners complained to me about another partner. I told him we should write a murder mystery, kill the son-of-a-bitch off in the first chapter and spend the rest of the book figuring out who did it. So, I did and I never looked back. That was in 1992.

My latest book, No Way Out (2010), is the third book in my series featuring former FBI Special Agent Jack Davis, following The Dead Man (April 2009), and Shakedown (2008). In Shakedown Jack's world is coming apart and there is nothing he can do about it. One reason is a rare movement disorder that has come out of nowhere, causing him to shake when he should shoot. It's something Jack and I have in common, his story providing me with a way of understanding mine. The Dead Man continues Jack's struggles with the dreams that haunt his past and a serial killer who makes his victims' worst nightmares come true. In No Way Out, Jack's search for two missing children leads him into a deadly web of deceit years in the making.

I became a ten-year overnight success with the publication of my first book, Motion To Kill, in 2002, introducing trial lawyer Lou Mason. Lou made his second appearance in 2003's Edgar® nominated The Last Witness. He managed to keep getting in and out of trouble in Cold Truth (2004) and Deadlocked (2005), which was nominated for a Shamus award and has been optioned for film. Sony Television optioned my short story, Knife Fight, published in the anthology The Prosecution Rests (2009), for development as a series. I retired from my law practice in 2006 and still haven't looked back.

I have learned some valuable lessons since I started writing. First, rewrite, but don't argue, when your mother tells you that your sex scenes are a little dry. Second, be nice to all your relatives. You never know when one of them will make a connection for you leading to a fantastic relationship with an agent. Third, when friends and strangers ask if they can be in your next book, tell them yes, so long as they pick one each from these three categories: hero or villain; living or dead; naked or dressed. I guarantee you that dead, naked villain will be the most popular choice.

For those of you interested in the statistical, my wife and I have three kids, all out in the world happily doing what they want where they want to do it. We also have two cockapoos, Roxy and Ruby, sisters born on Valentine's Day that may never grow up.

I am a fourth generation Kansas Citian and am named after my great grandfather who came to the United States in 1881. Legend has it that he overheard his parents arranging his marriage and decided to take his chances in the New World, leaving under cover of darkness. I don't know whether the story is true but I subscribe to this quote from one of my favorite movies, The Man Who Shot Liberty Valance: When legend becomes fact, print the legend.

TSG: Tell us about No Way Out.

Joel: While investigating the disappearance of two children, Jack Davis is caught in a shootout. When Roni Chase, a beautiful young woman, saves his life, he's drawn into a deadly web of deceit years in the making and is forced to choose between rescuing the missing children and saving Roni's life and his own.

TSG: What's been happening in Jack's life since The Dead Man?

Joel: Jack has been living his new normal life, adjusting to the movement disorder that forced him to retire from the FBI, trying to redefine himself in ways that make his life matter. Still grieving the deaths of his children, he tries to redeem their lives and his by helping others.

TSG: You and Jack have the same movement disorder. What is it and how does it affect your lives?

Joel: The disorder is called tics and it is similar to Tourette's. It's not life threatening or life shortening, but it is life annoying. It makes us shake and the more we do, the more we shake, spasm and stutter. The cause and cure are unknown. There are medications that help some people but didn't work for Jack or me and caused unacceptable side effects. We manage our symptoms by balancing our lifestyle, doing as much as we can without becoming walking mini-earthquakes. I spend my days writing. I also work out regularly so that my body can more easily tolerate the disorder. Jack isn't so fortunate. He's drawn into cases that threaten his balance and his life.

TSG: Why did you give Jack your movement disorder?

Joel: Tics forced me to quit practicing law after twenty-eight years as a successful trial lawyer. Writing Jack's character gives me an invaluable opportunity to explore that experience. Many of us define and validate ourselves through our work. When that is taken away from us, we are forced to dig deeper and find out whom we really are. Jack and I are doing that together.

TSG: No Way Out is set in Kansas City, as are all of your books. Why?

Joel: I'm a fourth generation Kansas Citian and I love my hometown. It has a fascinating history beginning with its birth as a riverfront trading post some founders wanted to name Old Possum Trot. It evolved into a wide-open town in the nineteen twenties and thirties where mobsters ran speakeasies and jazz joints where Count Basie played piano and Joe Turner translated the blues. It sent Harry Truman to the White House and, in the last half-century, became a major league city, part cow town, part cosmopolitan center. Its people are as diverse, open, warm-hearted and flawed as any people anywhere and I wouldn't trade them or the city for anyone or anyplace else. Most of No Way Out, takes place in Northeast Kansas City, a part of town all its own that captures Kansas City's past and forecasts its future.

TSG: What's next after No Way Out?

Joel: I'm working on a book based on a public defender named Alex Stone with her own brand of justice who I introduced in my short story Knife Fight, published in the anthology titled The Prosecution Rests. The character in the short story is named Elizabeth Rosenthal but as I worked on the book, I decided to change her name, more proof of why it's good to be the author.

TSG: What drives your stories?

Joel: I'm fascinated by what happens when things go wrong; how people respond to the unexpected and what they do when they think no one is looking.

TSG: What advice would you give to someone who wants to be a writer?

Joel: Just do it. The hardest thing for some people to do is to start. Writing a poem, a story, a play or a book seems overwhelming. Many people have told me that they want to or plan to write a book but they never do anything about it. If writing really is in your blood, the hard part won't be starting. It will be stopping.

Sample and buy Joel's e-books now from Top Suspense, or visit Joel's website at: www.joelgoldman.com
Posted by Dave Zeltserman at 6:57 AM