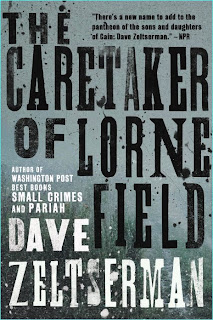 Book critic Chauncey Mabe also picked The Caretaker of Lorne Field as one of his favorite books of 2010, saying:

If H.P. Lovecraft collaborated with Jim Thompson, the result would be something like this foray into horror from a writer best known for noir crime fiction. Dread, suspicion, paranoia and a completely new variety of monster combine in a highly original effort.
Posted by Dave Zeltserman at 7:29 PM