Lee in a Nutshell 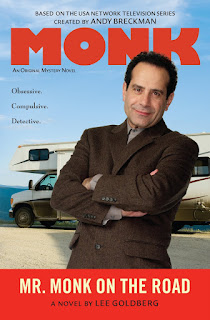 There's a nice article about me and my latest MONK novel in The Acorn, my local community newspaper. Here's an excerpt:


In his latest book, “Mr. Monk on the Road,” Calabasas author Lee Goldberg takes a brilliant but obsessive-compulsive detective on a new adventure to the open highway where “crime is a hitchhiker that won’t be ignored.”
Goldberg, 48, wrote numerous scripts for the “Monk” television show starring Tony Shalhoub. His novel for the complementary Penguin Group book series will be released Jan. 4.
“Books based on television shows do well because people enjoy reading about familiar characters,” Goldberg said.
Although Adrian Monk’s phobias and tics leave him incapable of handling the simplest aspects of day-to-day life, the detective is able to solve baffling murders.
“People love the character of Monk. He’s funny and everything works out in the end. People want that, especially in this economy,” said Goldberg, whose credits include “Monk,” “ Diagnosis Murder,” “ Baywatch,” “ Spenser: For Hire” and “The Cosby Mysteries.”
Goldberg also has produced shows and written dozens of novels and nonfiction books.
Goldberg said he works in an array of genres, including science fiction, crime, the occult, comedy and mystery to stay competitive in his trade.
“As a professional writer, I can’t wait for inspiration to strike. I go where the work is. I’m an artist, but at the same time I’m practical,” he said.