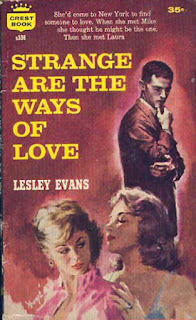 Lawrence Block has written a terrific piece for eFanzines.com - Earl Kemp: eI53 - e*I* Vol. 9 No. 6  about the thought-process behind his decision to release many of his obscure, long out-of-print paperbacks, many written under pen-names, in new, digital editions. He says, in part:


What other titles I decide to reissue will depend at least in part on what kind of money comes in from the ones I’ve already slated for e–publication.  If nobody’s interested in them, why inflict more upon the reading public?  But, if there turns out to be a genuine demand, well, hell, there’s more where those came from.

While I was writing the end notes for a Jill Emerson novel, A Madwoman’s Diary(originally Sensuous), I remembered that I’d based the plot on a case history from one of John Warren Wells’s books.  So I wound up writing at some length about my career as John Warren Wells and his psychosexual reportage.  And it occurred to me for the very first time that I might actually reissue those books as well.  Not all of them, I shouldn’t think, but one or two.  And if people like those—

“Greed is good,” Gordon Gekko famously informed us.  But why go all judgmental?  Greed, I’d say, is beyond good and evil.  It is what it is.

Which might be said as well for the books I’m bringing back.  And, come to think of it, for their author.