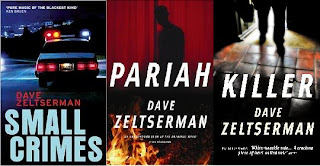 Each man on a different quest.

That’s the premise for my ‘man just out of prison’ noir trilogy which Serpent’s Tail is publishing. The first of these, Small Crimes, was published in 2008 and ended up being named by both National Public Radio and The Washington Post as one of the top crime novels of the year. In Small Crimes, my anti-hero, Joe Denton, is a disgraced ex-cop who is being paroled after eight years for violently disfiguring the County DA who was building a police corruption case against Joe. When Joe was on the force, he was a bent cop, a degenerate gambler, and a coke user. Now that he’s out and back in his fictional hometown of Bradley, Vermont, Joe finds nobody much wants him around anymore, not his parents, his ex-colleagues, or his ex-wife. Joe wants redemption for his past crimes, but the problem is there are too many old ghosts and too much anger for that happen, at least not without a significant cost. The damage that Joe and his releases end up causing the town is staggering.

The inspiration for Small Crimes came from two newspaper article I read. The first was about a cop who committed a similar crime as Joe’s, and like Joe, was able to serve out an amazingly short sentence in a County Jail. This cop also started collecting his pension shortly after being released! The second article was about a corrupt Sheriff’s office in Denver in the 60s where they were robbing stores blind, even going as far as carrying safes out of stores to bust open later. Merging both these stories together, I started playing what-if games and built a scenario in my mind of how a cop could be treated as lightly as Joe for such a heinous crime within an utterly corrupt small town atmosphere. And so Small Crimes was born.

The second book in my series, Pariah, was published in 2009 and also named by the Washington Post as one of the best books of the year, and is written on two levels—one level being a fierce crime story, the other a darkly subversive and satirical look at the New York publishing industry and all their follies, as well as the celebrity-crazed culture in our society. Like a lot of people in Boston, I was fascinated for years by the Whitey Bulger/Billy Bulger story, and read everything I could about it. Here you have the most feared mobster in Boston, with his brother being the State Senate President. Stories would come out about how Whitey would lean on other pols to keep his brother in power, and Billy would squash state police investigations into Whitey, going as far as ruining the careers of state police who would try to bring Whitey in.

After Whitey goes on the lam it then comes out that he was an informant for the FBI, that he corrupted several FBI agents, including his childhood friend, John Connolly. Connolly would tip him off if anyone went to the FBI to give up Whitey, and Whitey would use the FBI to weaken his competition. He'd also give up his own people at times to help Connolly and these other corrupt FBI agents advance their careers.

I knew there was a great crime novel in all of this, and I was mulling over what angle to go at when several things happened--first was a Harvard student who had a reported 500K 2-book deal with Little Brown being vilified for plagiarizing other chick lit books when writing hers. The other was the release of a couple of tell-all books around early March 2006, by South Boston mobsters (Brutal by Kevin Weeks, Rat Bastard by John “red” Shea). I now saw my angle, as well as getting excited about the idea of a "man just out of prison" trilogy, with Small Crimes being the first, Pariah the second. I wanted Pariah to start the same as Small Crimes--a man just getting out of prison, but have this man (Kyle Nevin) be the polar opposite of Joe Denton, my noir ‘hero’ in Small Crimes. While Joe, for all his weakness and self-delusion, is still someone who wants to go through life without causing anymore damage, Kyle is a force of nature; utterly ruthless and remorseless, and someone who leaves death and destruction wherever he goes. I wrote Pariah early in 2006, and finished the book months before the OJ Simpson "If I did it" book story came out--which was all a bizarre coincidence. Anyone reading Pariah will probably think I was inspired by Simpson’s failed book. Not at all. At the time I thought the behavior of my fictional publisher in Pariah was beyond the pall and would be too extreme for any actual publisher, but I was proven wrong. In writing this book I wanted to work in as much history of Whitey and the South Boston mob as I could, and I also wanted to write what could be considered a great crime novel--even with the satirical elements, I wanted to write this straight up, and not for laughs.

Killer rounds out this trilogy. Killer was inspired very loosely on the idea that Boston mob hitman, John Martorano, could murder 20 people, then end up striking a deal for a 12 year prison sentence in exchange for becoming a government witness against Whitey Bulger and the South Boston Mob. With Martorano, he is now out of prison and back in Boston where he’s living among the shadows of his victims.

My anti-hero in Killer is Leonard March. Like the real-life Martorano, March was also a hitman for the mob, in his case performing 28 hits. When he’s picked up on a racketeering charge, he strikes a deal for 14 years in exchange for testifying against the mob and immunity for all his past crimes. It’s only when the deal is struck that the authorities learn about his murders.

Just as Joe Denton and Kyle Nevin have there quests on leaving prison, so does March. His is a search for self-discovery. The chapters of Killer alternate between past and present, with the past chapters showing Leonard as a cold-blooded killer, while the present chapters show him as an older man trying to understand himself and his role in the universe. Since his release from prison he’s working as a janitor and living in a low-rent dirty pest-infested apartment. Any former glory is gone, as well as any fear he might have once have struck in the hearts of the Boston underworld. He has been reduced to a toothless wolf left howling futilely at the moon. March wants to believe that his past job was just a job, that things could have been different for him. That he could have been a good husband and father. In many ways, Killer is a meditation on the mind of a killer, and in the end when Leonard’s past collides with his present the mystery of how these two sides of March can be reconciled is at last answered.
Posted by Dave Zeltserman at 9:00 AM