Author Joe Konrath  made the front page of The Los Angeles Times in a story with the provocative headline "Authors Writing Off Publishers" (the headline makes a curious shift in focus in the online edition: "Book Publishers See Their Role as Gatekeepers Shrink"). Here's an excerpt:


Joe Konrath can't wait for his books to go out of print.

When that happens, the 40-year-old crime novelist plans to reclaim the copyrights from his publisher, Hyperion Books, and self-publish them on Amazon.com, Apple Inc.'s iBooks and other online outlets. That way he'll be able to collect 70% of the sale price, compared with the 6% to 18% he receives from Hyperion.

As for future novels, Konrath plans to self-publish all of them in digital form without having to leave his house inSchaumburg, Ill.

"I doubt I'll ever have another traditional print deal," said the author of "Whiskey Sour," "Bloody Mary" and other titles. "I can earn more money on my own."

For more than a century, writers have made the fabled pilgrimage to New York, offering their stories to publishing houses and dreaming of bound editions on bookstore shelves. Publishers had the power of the purse and the press. They doled out advances to writers they deemed worthy and paid the cost of printing, binding and delivering books to bookstores. In the world of print, few authors could afford to self-publish.

The Internet has changed all that, allowing writers to sell their works directly to readers, bypassing agents and publishers who once were the gatekeepers.

It's difficult to gauge just how many authors are dumping their publishing houses to self-publish online, though for now, the overall share remains small. But hardly a month goes by without a well-known writer taking the leap or declaring an intention to do so.

It is certainly the hot-topic of discussion whenever I get together with my writer-friends. I even had a long talk about it with my publisher during Bouchercon, who seemed honestly stunned by the money I was making off my backlist, particularly THE WALK. 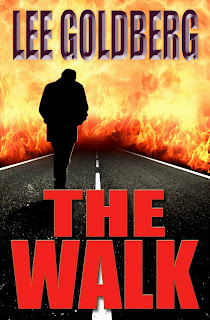 In fact, my wife was looking at my Kindle royalties the other day... which have hit an all-time high and are paid within weeks... and asked me why I even bothered continuing to write my MONK novels. Even the CreateSpace print-on-demand paperback edition of THE WALK is selling surprisingly well (If sales continue at the current pace, I'll sell 150 copies of the paperback this month, with a royalty of $4.04 per book). All of that is gravy...remember, these are out-of-print books of mine that we are talking about.

Even though the MONK books sell very well, in hardcover and paperback, my royalty rate is substantially less than what I earn on my out-of-print work on the Kindle.  And it can take more than a year, often much longer, before I see any royalty checks, particularly on my early, three-book deals that were cross-collateralized (on those, I don't get paid until all three books earn out my advance). And then, of course, there's the commission my agent takes from every check (and I am not begrudging her that at all, she worked very hard for it).

So yeah, self-publishing is looking very good to me. Something that would have been inconceivable to me as recently as two years ago. Here's more from the article:


Authors typically get 10% to 25% of the proceeds of digital sales if they go through a publisher, compared with 40% to 70% if they self-publish.

For Konrath, the math made his choice easy. He said he earned $1.17 in royalties for each digital copy of "Whiskey Sour" sold by Hyperion. That's roughly 25% of the sale price of $4.69.

"If a traditional publisher offered me a quarter of a million dollars for a novel, I'd consider it," he said. "But anything less than that, I'm sure I can do better on my own."

He makes a good point...one readers of this blog have heard repeatedly. The publishing world has changed dramatically in the last twelve months and so has my thinking about my own future as an author.
I will keep writing the MONK books as long as they continue being successful...but I honestly don't know whether I will take my next original novel to publishers, unless my agent can convince me it's a game-changer that will be a break me out of the mid-list.

For an established mid-list author like myself, I can't say that working with publishers really makes much financial sense any more...it certainly doesn't to my wife, whose opinion carries a lot of sway with me.
But how do you get readers to find your work amidst the tsunami of sludge...all the hideous, not-ready-for-primetime swill that's being sold by aspiring writers? Here's what the article had to say about that:


With millions of titles potentially flooding the market, readers will have to rely more on external cues to guide their purchases, whether it's a favorable review from a celebrity, a tip from a social-media contact or the backing of a major publisher.

"Until someone comes up with an algorithm to sort the good manuscripts from the bad, publishers and their human network of agents and editors maintain an advantage," McQuivey said. "But sooner or later someone will create a new way for readers to find the books they most want to read, and that someone may or may not be a traditional book publisher."

It may not even be human.

Indeed, the challenge in a world where anyone can publish a book is getting people to pay attention.

To that end, in my our own small way, I've banded together with Max Allan Collins, Vicki Hendricks, Harry Shannon, Joel Goldman, Dave Zeltserman, Ed Gorman, Paul Levine, and Bill Crider to create Top Suspense, a place where readers can find ebooks by estalished, acclaimed, award-winning writers whose work they can rely on to deliver the goods in a variety of genres...horror, westerns, mystery, thrillers, and crime. It's a small step...but it could blossom into something more. At this point, everything in the digital book world is an experiment of sorts...but exciting and full of possibilities nonetheless.
Posted by Lee Goldberg at 6:07 PM