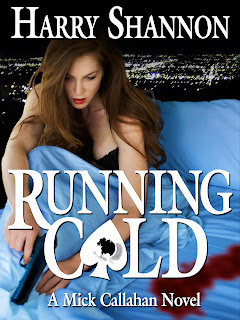 Harry Shannon, here. I created media psychologist Mick Callahan as the protagonist of my debut hardcover mystery. Mick was born and raised near the small town of Wells, Nevada. He's an alcoholic, a loyal friend, a hot tempered genius. After a failed stint in the Navy Seals, Mick studied Psychology and ended up hosting a television show. Booze, sex and ego brought him down. Over the course of the four novels in the series, he's gone from humiliated and sober and on the comeback trail (Memorial Day), working in radio again (Eye of the Burning Man), back on track but in trouble with the mob (One of the Wicked) and now, in RUNNING COLD, your Top Suspense Sizzling Summer Read of the day, Mick is on the edge of collapse, fighting a return to the bottle and mourning the loss of his girlfriend.

And then one of Callahan's clients is murdered. The client's son Wes McCann is a soldier recently returned from Afghanistan. Wes blames Callahan. These two dangerous men are set on a collision course, one crazed with grief and the other tortured by guilt. I've been told that Running Cold is the darkest of the four Callahan novels, and I suppose that's true, though for me Callahan's deep concern for others and his sense of integrity always shine. He's flawed and troubled, but he's a good man. If character is destiny, Mick will likely end up okay when this series ends. Hell, he deserves that much after all I've put him through!

"Mick Callahan is a man with a past, a mean right hook, and a radio talk show. He's pretty good at giving people advice - just not necessarily good at taking it. The strength of this series is in its central characters, flawed, human, often funny, sometimes tragic, and the relationships among them."
—Mystery Scene

"Mick Callahan is not only likeable (as deemed by Library Journal) but he manages to endear himself as a very realistic hero, with a strong sense of purpose and an equal dash of vulnerability."
—Cemetery Dance

Buy the book here.
Posted by Harry Shannon at 5:00 AM