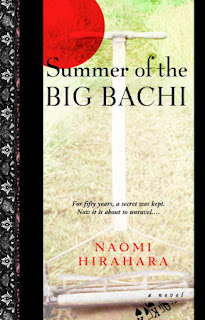 My first mystery novel, SUMMER OF THE BIG BACHI, is probably the most challenging one in my mystery series featuring cranky gardener Mas Arai. From start to publication, it probably took me fifteen years. It’s a flawed book yet a very ambitious one. For all these reasons, it still remains my favorite.

Mas Arai (pronounced “awry,” as in things go “awry”) is an atomic-bomb survivor who has lived in the foothills of the San Gabriel Mountains in Southern California for more than half a century. He lost his wife years ago. He is estranged from his daughter. Other than a beat-up Ford truck and a couple of good friends, he doesn’t have a lot going for him. But, of course, there’s more to Mas than meets the eye. He has a secret from his days in Hiroshima during World War II and, of course, that secret is now ready to unravel in Los Angeles 1999.

Why do I describe my first novel as flawed? This is not a finely tuned mystery novel, as sits probably in the middle of being a traditional mystery and literary fiction. Mas is very broken in this novel and not that likable at times. And I use a lot of dialect. BACHI, for instance, means “what goes around, comes around.”

I feel that SUMMER OF THE BIG BACHI captures a community of people that you probably never knew existed. They have survived and thrived through experiences you couldn’t imagine. This summer, spend a few days in Mas Arai’s world. It will be a fresh, and unique experience and probably one you won’t forget.

You can read reviews and a sample right here. Or if you're on Nook, here.

Posted by Libby Hellmann at 1:00 AM