Voluntary Madness in a Dream 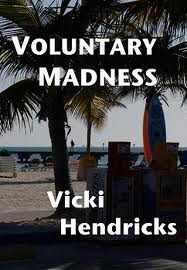 The mind is a wonderful thing, especially the subconscious. Knowing I had a blog to write, last night I dreamed that Top Suspense Group accidentally killed someone as the result of a publicity push. The dream started in the midst of the problem, just like a short story, so I don’t know how we did it, but we were genuinely sorry (being all nice people) and fearful enough of the police not to report the death, thus setting ourselves up for a murder charge. Our plan of defense was to “act normal.” This is what Dave Zeltserman told us, and Paul Levine (a lawyer as well as a writer) seconded it.

Dave’s wife, Judy, (although she was uninvolved, having been away practicing homeopathy) and I decided that shopping was the proper normal action. The scene jumped from a view of tall buildings in NYC to a huge clothing department where everything we tried on fit! We had very little time before the police interview and, apparently, lots of money to spend. Just in time, both of us managed to put together charming outfits with many accessories, mine including a small powder blue book bag that I was crazy about. (Freudian or Jungian interpretations invited.) However, our normal behavior and chic outfits were not enough to get us off the charges, and suddenly, as only in a dream, we were all headed for prison. I was stressed and uncomfortable until I opened my eyes and saw my ceiling fan.

Okay, beyond that, Juliette flashes nude in an alley in Key West to create a scene for Punch’s novel, the couple breaks into Hemingway House to avoid the crowds, and they steal carry-outs from gourmet restaurants, among other quirky criminal antics, amidst bohemian Key West personalities and places. None of that was in my dream, but maybe if I’d slept later . . . .

I guess what I’m thinking is that if you enjoy characters with off-kilter psychology, then you’ll like the book. It’s filled with light crime, heavy sex, and Key-west weird. There’s a Yorkie seeing-eye dog to satisfy your animal cravings and a visit to Coral Castle where you’ll learn the meaning of true love—the stuff dreams are made of.