Today's Sizzling Summer Read: No One Will Hear You 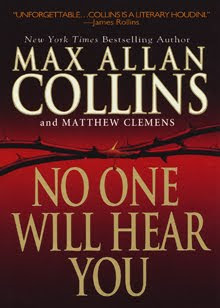 Two serial killers vie for the attention of the public in NO ONE WILL HEAR YOU, the second J.C. Harrow thriller by Matt Clemens and me. You needn’t have read YOU CAN’T STOP ME to jump in here, however, and as much as we like the first book – recently a nominee for the Best Paperback Thriller of the Year – Matt and I feel we’ve upped the ante and improved our game second-time around.

We listened to reviewers and readers and sought to make NO ONE WILL HEAR YOU a state-of-the-art thrill ride. We made the chapters shorter, increased the plot twists, even while trying to delve deeper in the characters...not just Harrow and his superstar forensics team, but the killers themselves. And we introduced a secondary protagonist, LAPD sex crimes detective, Lt. Anna Amari, who more than holds her own with Harrow.

J.C. Harrow is a tragic hero, a former Midwestern sheriff who once saved the President’s life at the Iowa State Fair but – on the same day – lost his family to a homicidal maniac. The national attention this brought him inspired Harrow to become the host of “Crime Seen!” – a sort of reality TV version of CSI, providing Harrow with the platform...and funds...to track down his family’s murderer.

This he did in YOU CAN’T STOP ME, and now in NO ONE WILL HEAR YOU he is questioning whether he should continue on as host of this popular show, contemplating returning to law enforcement in some other small Midwestern town. That’s when a video shows up at Crime Seen HQ from “Don Juan” – a serial killer who murderers a woman on camera by way of “trying out” to be the show’s next villain. When a second killer makes a similar demand, Harrow and his team wonder if they are breeding killers as much as tracking them down....

In addition to being a thriller that has been called “riveting,” NO ONE WILL HEAR YOU takes a sharply critical and satirical look at the reality TV craze and its downside.

True-crime writer Matt Clemens and I collaborated on the first eight CSI novels, and the first two CSI MIAMI novels, selling millions of copies. We later wrote the only BONES novel and three CRIMINAL MINDS novels, becoming along the way a team well-versed in serial killer-fueled suspense and forensics sleuthing. We feel NO ONE WILL HEAR YOU is the best – and certainly most exciting and frightening – of the thrillers we’ve written together.

MAX ALLAN COLLINS is the author of ROAD TO PERDITION, the graphic novel basis for the Tom Hanks Academy Award-winning film.

No One Will Hear You is available now for both the Kindle and Nook.
Posted by Dave Zeltserman at 6:00 AM