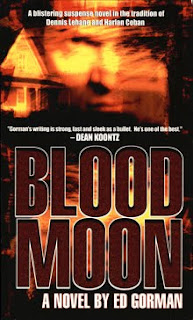 Judging by reader mail over the years Blood Moon is the most sinister of all my suspense novels.

I started working on the story after reading two unrelated news stories. One had to do with a strange series of murders in a rural community. The other was about a very rich young man who'd been found guilty of second degree murder for the death of his girl friend and was serving time in particularly violent prison. I wondered both about the nature of the murderer in the boonies and also how the young men, accustomed to a rather cushy life from all accounts, would survive behind bars. A story began to emerge.

"As much a superb thriller as it is a well-plotted detective story." Mystery News

The novel was first published in England where the reviews were generally excellent. The major book club in the UK picked it up and it did well for them. Over here the reviews were also good. I'd written a fair share of horror in the eighties and I was glad to see that mystery readers appreciated how I'd combined the mood of my earlier stories with the whodunit form.

BLOOD MOON is ON SALE now for a limited time for $0.99. To buy for the Kindle click here.
Posted by Dave Zeltserman at 5:00 AM