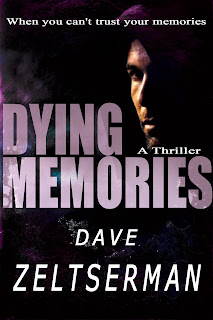 Dying Memories opens with a woman shooting a man to death on a crowded street in Boston, claiming that this man raped and murdered her eleven-year old daughter. Except he didn't, because this woman never had a daughter. Another man stabs an MIT professor to death in front of a crowd in Harvard Square, insisting that he witnessed the professor running down his wife in the street. Except the MIT professor was three thousand miles away when the man's wife was killed.

Reporter Bill Conway discovers that these victims are connected to ViGen Corporation, a shadowy pharmaceutical company. When he tries to investigate ViGen Corporation and their role in these deaths, things quickly turn dangerous for him. The following short excerpt has Bill being questioned after being grabbed from the street and thrown into a van, with his interrogators insisting that his real name is Jeffrey Vozzmer.

“Yes you do, Jeffrey. We’re not idiots here. Tell me what I want to know and this will all be over.”

“Check my wallet,” Bill pleaded. He was nauseous, his left ear throbbing. “My driver’s license will show you that I’m not this Jeffrey Vozzmer.”

“And what would that prove?” Simon asked. “That you took the precautions to be carrying a fake ID? Please, Jeffrey, we’re not amateurs. You should know that.”

“This is all fucked up,” Bill insisted weakly. “I’m not Jeffrey Vozzmer. I never heard that name before.”

Simon ignored Bill, said patiently, “Tell me what I want to know.”

“I don’t know what you want to know.”

The same behemoth who had punched him before raised an eyebrow, asking an unspoken question. Simon, sitting opposite Bill, took his time before shaking his head.

“No, I don’t believe that will be necessary,” he said. “I’m sure we can facilitate Jeffrey to talk without having to resort to any further violence, even if it won’t be of his own volition.” Then to Bill, “One last time, tell me what I want to know.”

Numbly, Bill shook his head. “I swear, I don’t know what that is,” he said.

Simon sighed and picked up a small leather case that was on the seat next to him. He opened the case carefully, almost lovingly, and took from it a hypodermic needle, which he held up for Bill to look at.

“Relax,” Simon lied. “It’s only sodium pentothal. More than enough to loosen your lips but not enough to cause any serious damage. At least not usually.”

Simon then leaned forward. Bill tried to struggle, but the two thugs held him steady.

“If there was a chance that you would cooperate and remove your jacket I wouldn’t need to inject this inside your gum,” Simon cooed softly. “But one must do what one must do. Now, please open your mouth or I’ll have my associates force it open.”

Then it was as if a bomb had been detonated.

Bill escapes this ordeal, but soon finds that it’s not just these mysterious forces after him as he’s framed for a brutal murder. Or at least Bill’s pretty sure he’s been framed. The thing is, as with the reader, Bill’s never quite sure what’s real or not. All he knows is his peril, as well as the stakes involved, keep escalating by the minute.

Dying Memories has some similarities with my crime novels. It’s bullet paced with whiplash-inducing twists and turns throughout which will keep both Bill and the reader off balance. Where it’s very different than my crime novels, like Small Crimes, Pariah, Killer and Fast Lane, is that while they’re pitch black descents into the abyss, Dying Memories is more of a rollercoaster ride colored a murky gray that’s brightened by constant flashes of red. And where my crime novel protagonists, Joe Denton, Kyle Nevin, Leonard March and Johnny Lane, are, putting it as delicately as I can, pretty much bastards who readers root for (at least at some level) to find the hell they deserve, the hero of Dying Memories, Bill Conway, is very different. He’s someone the reader is going to be able to care about.

I hope you enjoy Dying Memories. To buy for the Kindle click here. For the Nook, here.
Posted by Dave Zeltserman at 5:00 AM