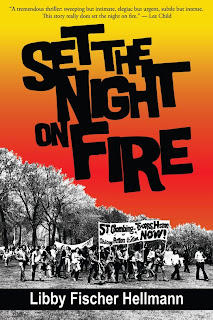 "A tremendous book - sweeping but intimate, elegiac but urgent, subtle but intense. This story really does set the night on fire." --Lee Child

"A brilliantly-paced thriller, transitioning seamlessly from modern-day Chicago to the late '60s. First-rate characterization...Best to start early in the day, as it is easy to stay up all night reading it." --Foreword Magazine

"Set the Night on Fire is a compelling story of love, truth and redemption. This will be a break-out novel for this talented writer. Highly recommended." --Sheldon Siegel, NYTImes bestselling author of Perfect Alibi

"A top-rate thriller that taps into the antiwar protests of the 1960s... A jazzy fusion of past and present, Hellman's insightful, politically charged whodunit explores a fascinating period in American history."
--Publishers Weekly

That's what reviewers are saying. Here's what I say:

I do remember the Sixties.

Especially 1968. That was the turning point in my political "coming of age." I was in college in Philadelphia on April 4th when Martin Luther King was assassinated. I watched as riots consumed the inner cities. I was saddened and disappointed -- as a teenager growing up in Washington DC, I'd gone to plenty of concerts at the Howard theater where blacks and whites grooved to Motown artists together. I actually thought we were moving towards a color-blind society -- I was young and idealistic then). So the frustration and rage expressed through the riots was - in a way- confusing.

Two months later I understood. My college boyfriend had been tapped to head up the national "Youth for Bobby Kennedy" program. I was really excited; I planned on dropping out for a semester to work with him. For some reason I couldn't sleep the night of June 5th and turned on my radio. Bobby had been shot just after winning the California Democratic primary. He died the next day. So much for the Youth for Kennedy campaign.

Sadness soon gave way to bitterness. The country was falling apart. Over the years some of our brightest lights had been snuffed out. Internationally our government seemed to be supporting the "bad guys." And underlying it all was an unwinnable war that - perversely -- was escalating and risking the lives of my peers. I began to question why I should work through the system, especially when the system wasn't working for us.

I wasn't alone. Plenty of others yearned for change. Fundamental change that would rebuild our society and culture. The next few years were tumultuous and volatile, but in the final analysis, we failed. Maybe the task was impossible -- how many Utopias exist? Sure, there were cultural shifts. But political change, in the sense of what to expect from our leaders and our government? Not so much. The era left me with unresolved feelings. What should we have done differently? Are all progressive movements doomed to fail?

At this point you're probably wondering what this has to do with writing a thriller. And you'd be right. It's never been my intention to write a political screed. I am a storyteller whose stories, hopefully, you can't put down. I realized that if I was going to write about the Sixties, I needed a premise that would hook readers in the present, regardless of how much they know or remembered about the Sixties.

I found that premise in a film. Do you remember SIGNS, starring Mel Gibson? It came out in 2002, and I thought the first half was the most riveting film I'd ever seen. Gibson's family is being stalked, but they don't know who and they don't know why. The second half of the film, when we discover it's just your garden variety aliens, was an enormous let down. Putting a face, an identity, on fear reduces its power. But NOT knowing who's targeting you -- or why -- is the most frightening thing I can imagine.

So that's what happens to Lila Hilliard, a thirty-something professional who's come home to Chicago for the holidays. Someone has killed her family, and now they're after her. She has no idea who or why. As she desperately tries to figure it out, she finds wisps of clues that lead back to her parents' activities forty years ago. In the process she discovers that her parents were not the people she thought.

The relationship between the past and present, the consequences of events that occurred years ago fascinate me. I also love stories that plunge characters into danger and make them draw on resources they didn't know they had. SET THE NIGHT ON FIRE was the way to combine all those themes. Writing the book was an exorcism of sorts, a way to make peace with the past. And while I enjoyed reliving the past, I loved putting it behind me even more. I'm finally ready to move on.

I hope you enjoy the read. To buy the book from Amazon click here. From Nook, here. And for more about the book, and me, and everything else, just click here.